The new features in the iPhone 14 line-up and differences 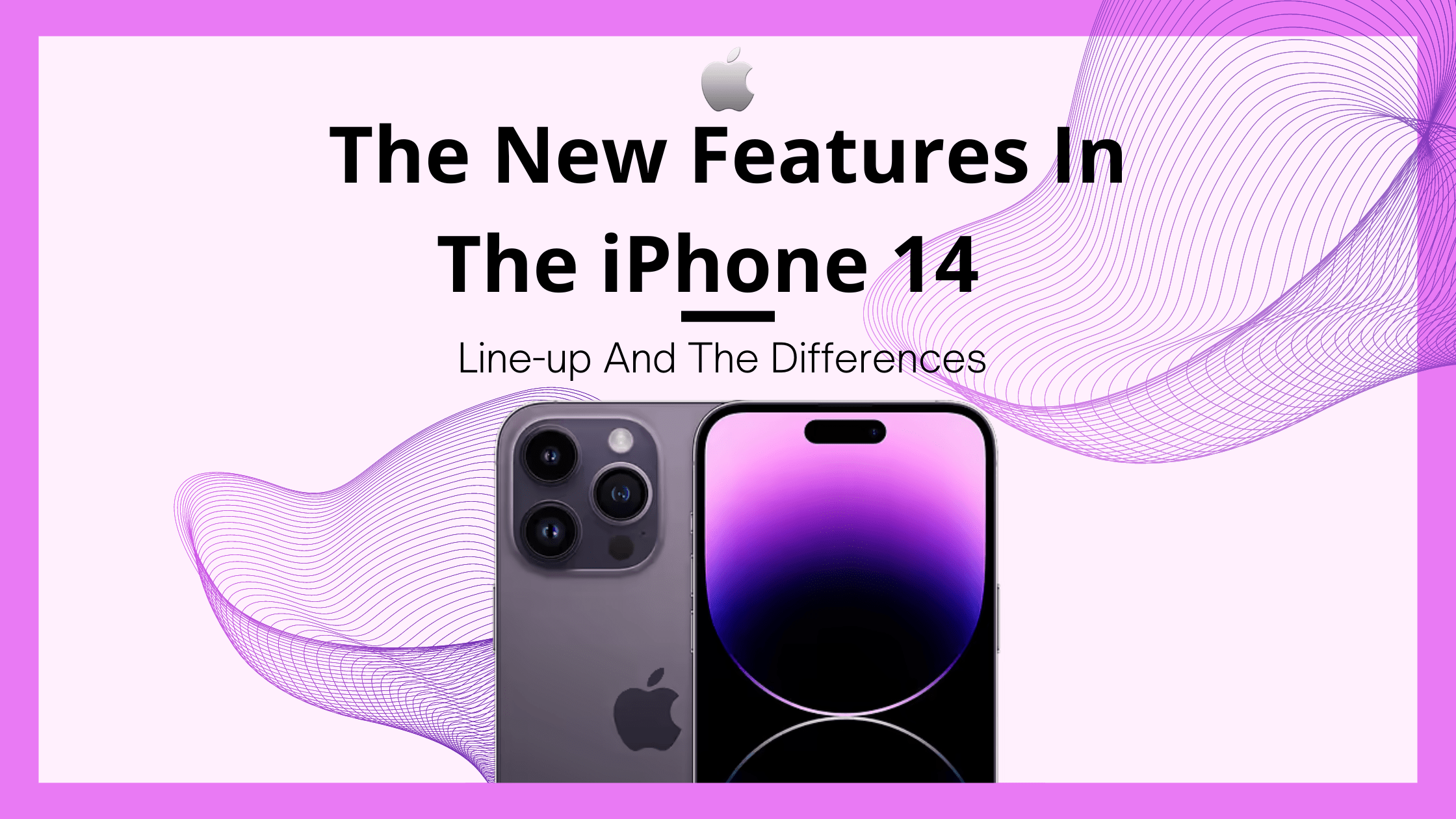 Apple has released the new iPhone 14 and iPhone 14 Pro. This year, Apple launched the same number of iPhones as last year and the year before. Due to Apple’s decision to name this year’s iPhones differently and their differing features, the iPhone line-up is more confusing than ever before.

If you’re wondering which one to choose or is the latest line-up is worth upgrading or not, here’s a quick explanation.

The latest reports are indicating that the pro and the pro Max make up to 80 percent of the pre-orders of the expensive phones everybody’s ordering and skipping the standard iPhone 14. Let’s discuss why that might be the case, if you watch Apple’s presentation then you recognize that this phone has a little bit more in common with the previous generation.

If you have already purchased iPhone 14 and no one is blinking an eye, it is not your fault. Both iPhone 13 and 14 look exactly the same except for the colours and camera bump which is hard to recognize. And this is perhaps the reason why pre-orders for iPhone 14 are Worse than For iPhone 13 Mini.

Moreover, it is for the first time that the chip is almost identical because the A15 bionic is still in the iPhone 14. The only difference is it’s using the A15 from the iPhone 13 Pro which means that you might get a little bit more performance if you’re playing games because of that extra GPU core now in terms of the design they’re pretty much identical. Also, iPhone 14 has aluminium build similar to iPhone 13, but it comes in a new blue colour.

So, if you already have a previous model of iPhone, it won’t be much of a change to switch to iPhone 14 regular model for $800, when you can get an iPhone 14 pro for just paying $200 extra.

However, don’t be disheartened because this time while you pay $200 extra you get actually much more as compared to the case in previous iPhone lineups in which regular and pro had much in common.

Difference between regular and Pro series of iPhone 14:

Let’s delve deeper into the differences, which will help you choose the best model of the iPhone 14 line up.

There are three major things that are new with the iPhone 14 Pro: the internals, the externals, the display, and the cameras.

A) Latest A16 Bionic Chip

As expected, only the Pro models have seen a spec bump this year, meaning you’ll have to spend more money to get the best Apple silicon. The company’s new A16 Bionic brings a lot of meaningful upgrades to the table but it’s limited to the iPhone 14 Pro and the iPhone 14 Pro Max. The standard iPhone 14 and the iPhone 14 Plus, on the other hand, will use last year’s A15 Bionic. It’s still an upgrade from the iPhone 13 because new ones use the A15 Bionic with a 5-core GPU instead of the 4-core SKU.

Apple’s A16 Bionic may not bring any significant upgrades to the overall performance, but it adds things like the display engine for a significantly better experience. Not to mention, it’s also significantly more power-efficient so you can expect to see better battery life on the Pro models this year.

The non-Pro iPhones start at 128GB and top out at 512GB storage for the top-of-the-line variant, while the new iPhone 14 Pro models can be bought with up to 1TB of storage. Do keep in mind that you’ll have to pick up at least the 256GB variant of the Pro variants to take advantage of features like ProRes video recording at 4K-30fps.

Both devices are fast-charge capable and can charge up to 50 percent in 30 to 35 minutes with a 20W or higher power adapter.

The whole iPhone 14 line-up debuts first ever safety features that can deliver aid in an emergency when it counts the most. With a new high dynamic range gyroscope and dual-core accelerometer that can detect G-force readings of up to 256Gs, Crash Detection on the iPhone can now identify a serious auto accident and quickly contact emergency services when a user is unconscious or unable to reach their iPhone. These capabilities expand upon already-existing features like the barometer, which can now detect changes in cabin pressure, the GPS, which provides extra input for changes in speed, and the microphone, which can identify loud noises characteristic of serious auto accidents. Even more precision is provided by sophisticated motion algorithms created by Apple that were honed using more than a million hours of actual driving and collision record data.

As with the iPhone 13 models, the iPhone 14 lineup support 5G connectivity (sub-6GHz and mmWave in the United States), and they use a new Qualcomm X65 modem. In the United States, iPhone models ship without a physical SIM card as carriers now use eSIM. For people who switch phones or use sim cards for data when traveling this may be a point of concern.

Another new feature of the iPhone 14 lineup is Emergency SOS via satellite, which combines specialised parts that are tightly linked with software to enable antennas to connect directly to a satellite, enabling communicating with emergency service providers when cellular or Wi-Fi connectivity is not available. Sending a message through a satellite might take minutes since they are moving targets with minimal bandwidth. When there is no cellular or Wi-Fi connection, this ground-breaking technology also enables users to manually communicate their position with Find My over satellite, giving them peace of mind while trekking or camping off the grid. Users in the US and Canada will be able to this feature via satellite in November, and the service will be free for the first two years.

The new colours for the iPhone 14 lineup are : blue and purple and the pro version have a matte finish while as regular version doesn’t.

This is not a stark difference between the 14 and 13 line-up, nevertheless it is worth mentioning your iPhone 13 case won’t fit iPhone 14 because of this reason.

The iPhone Pro models are the only iPhones with support for ProMotion technology with adaptive refresh rates up to 120Hz, which gives users a fluid and smooth experience. The regular iPhone 14 and the iPhone 14 Plus still have the 60Hz display.

B) Always on Display/ Lock screen

The iPhone Pro models support the Always-On display, which was already available in android, now apple has it too. This is enabled by the new Apple silicon; the A16 Bionics’ new display engine, which is also supports the brightness of up to 2,000 nits on the iPhone 14 Pro and the iPhone 14 Pro Max. The cheaper iPhone 14 models are still use the last year’s A15 Bionic chipset, so they don’t support Always-On display.

The new iPhone 14 Pro and the iPhone 14 Pro Max have a pill-shaped cut-out on the top of display screen instead of a notch over there. This is a big change for the new iPhone 14 line up as they’re the first ones. It’s named Dynamic Island and it has an inbuilt software that enables it to move around and animate to show you different UI elements.

Pro series is all about camera. It is safe to say that the Pro models have received some major camera upgrades in 2022 but the standard iPhone 14 and the iPhone 14 Plus use the same dual-camera system as the one in iPhone 13.

A) 48 Megapixel sensor: a big leap from 12 megapixels

iPhones are moving away from 12MP sensors to 48MP ones for the first time. For “professional” photographers and videographers, this is expected to be a big leap. Due to the new photonic engine, low-light photography will be greatly improved. As for the ultra-wide and telephoto lenses, you can expect some slight improvements over last year’s iPhone 13 Pro models. However, the 48MP sensor on the Pro models is the real showstopper.

In addition to the Photonic Engine, the non-Pro iPhones also have a dual-camera setup with 12MP main and ultra-wide lenses.

The larger sensor gives you more light gathering and sharpness, as well as faster shutter speeds, so motion is frozen more often in less-than-ideal conditions. Moreover, the shorter shutter time lets me take low-light pictures. However, the larger sensor also allows you to get a shallower depth of field without a portrait mode, which is more than an iPhone has ever been able to achieve.

100% coverage with focus pixels has been pretty locked in on tracking subjects and keeping things in focus even with the shallow depth of the field.

What are the well-known issues in iPhone 14 so far?

Apple’s new range has been jeopardized by numerous bugs at launch, for which Apple had to release two emergency updates already for iOS 16. Apple’s iOS 16.0.1 release notification described the update as providing “important bug fixes” and it mentioned the following fixes specifically:

However, there are several complaints that the latest issues impact CarPlay phone calls and freezing while data migration. There may be some other small issues too, but it is expected Apple would resolve those as well.

As the new iOS 16 hits the market, the latest guidelines for app developers also change. This means you have to go through the entire Apple Developer policies documentation again so that your app gets approved by Appstore.

And this is not the end Apple will roll out new guidelines as soon as another update is launched, so it is a never-ending process. The burden falls on the app developers to check each and every detail of the guideline and ensure that their app follows all, which is a lot of work.

However, you don’t need to worry about this. Here comes Swing2App the no code app builder to your rescue.

With Swing2app you can create no-code apps supported by every device according to the new policy and new guidelines without much hassle. So, you don’t have to worry about the latest policy changes or iOS upgrades.

The new iPhone14 Pro has different looks from the previous model as well as the latest iOS 16, which means if you were creating an app, you will have to update it all as per the latest policy guidelines (which are very dynamic in nature as Apple keeps updating them time to time).

To avoid this risk of App rejection and extra work to upgrade, you can create a no-code app effortlessly with Swing2App.

Swing2App takes care of the entire app upload process over the Appstore for just $20!

All you need to do is come up with a brilliant app idea, create it in Swing2App’s codeless platform, and let us handle the difficult task of app publishing and approval.

There’s no doubt that this year’s Pro models offer significantly better features than the standard iPhones, besides the obvious size differences between them. In addition to the unique camera cut-out, you also get a better screen with a higher refresh rate and higher peak brightness. Instead of just getting a storage bump on the top end, you get a better chipset inside the Pro models. Last but not least, the camera is the biggest difference between the Pro and regular iPhone 14 lineup. A new 48MP wide sensor is included in the Pro, which is said to be 65 percent larger than the standard sensor.

So, iPhone Pro is definitely going to be the wiser and better choice either if you are upgrading your old phone or intend to buy a new one.