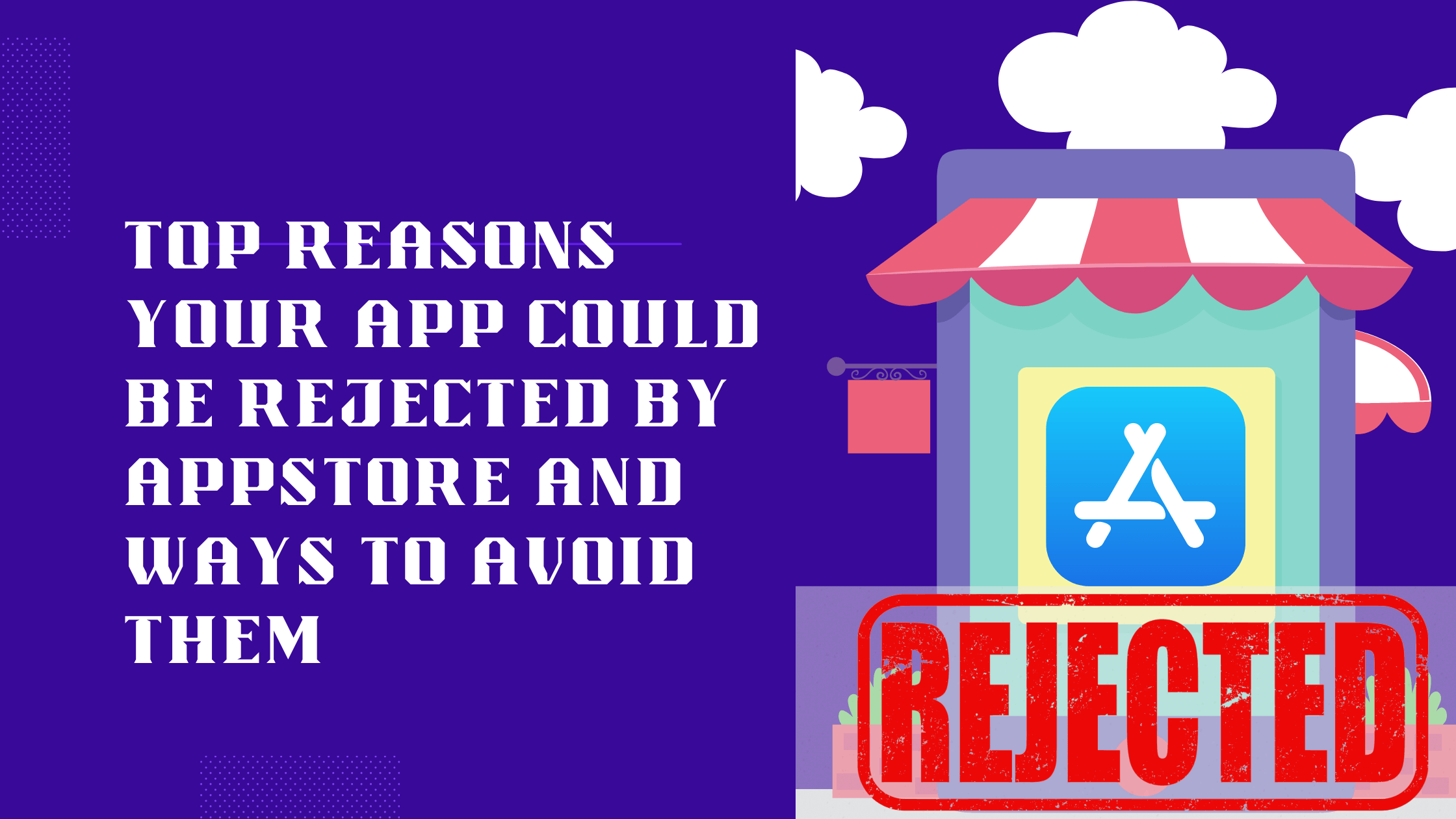 If you are stressed about app store rejection, this post will help you understand what you need to do to get your app accepted in your first attempt.

There are over 2 million apps in the iOS app store, so entering such a competitive market is no easy task.

Apple reports that 88% of those Appstore rejections are caused by the most common errors.

The App Review team rejected more than 34,500 apps in 2021 for containing hidden or undocumented features, and upward of 157,000 apps for being spam, copycats, or misleading to users.

This might scare you if you created an iOS that you think is amazing. Many Appstore rejections are due to the simple fact that the Appstore maintains quality and quality as well as security, so Apple is clearly very strict in this matter.

You can use Swing2App to create your own iOS app, and it can also help you submit it to the Apple App Store, which you must do from your own account.

The following tips will help you get through the submission process smoothly and have your app approved on the first try.

These are a duplicate of another app or are slightly like another app  Guideline 4.1 – Design – Copycats

Consider carefully before upgrading to the latest mobile trend. Considering there are already 15 versions on the market, Apple may not feel it’s a useful addition to the Appstore. Unoriginal content annoys Apple’s reviewers and users. You can avoid Appstore rejection by creating your own unique app and content.

It is common for these kinds of apps to include false, misleading, or fraudulent information, or titles and icons that are similar to the titles and icons of other famous apps. Third-party content is included in this rule.

Compared to mobile browsing, your app provides a limited user experience. Thus, it provides a similar experience to Opera or Safari in general. Adding iOS features such as push notifications, Core Location, and sharing will not provide a robust enough app store experience.

Guideline 4.2 – Design – Minimum Functionality  If your app is based on a website, make sure that what you upload is, rather than simply wrapping your website as an app.

If you’re looking for a solution to convert your site into an app and want to avoid any risk of Apple rejection, check out Swing2App. While the apps are built from your existing site or web app – Swing2App gives them functionality that goes way beyond that, and there’s no chance of an Apple rejection!

Carefully understand Apple’s Human Interface Guidelines before designing your app. It will provide you with a basic idea of how to properly design a user interface. As you can see from this example from Apple, clear dos and don’ts for UI :

Another reason why you may face Apple rejection is if the information provided by you for the store and for review purposes is incomplete or not up to date. View Guideline 2.1

The app information should be complete and include all the important details like:

Screenshots should accurately communicate value and functionality. Use text and overlay images to highlight the user experience, not obscure it.

As you can imagine, Apple doesn’t take too kindly to apps that contain explicit bugs or full-out system failures. If your testing of the app demonstrates an unstable performance and ongoing crashes, get that fixed first before submitting for review – if not your app is almost guaranteed to be rejected by Apple. Make sure your app works without any crashes or bugs to provide seamless experience to the users.

It doesn’t matter how stunning your app looks or how entertaining it is, Apple expects it to run fluidly. If the entry screen causes confusion or frustration, if navigation is choppy, if pages take too long to load – users will be unhappy. Apple will keep that from happening by outright rejecting your app from Appstore.

Apple has strict rules for quality and performance of apps, which if your app doesn’t match then it might get rejected on Appstore.

If the app interface is too complex or unfinished, it is also the case. If you fail to meet the interface requirements specified in the design guidelines, it will force Apple to reject your app.

The left preview is incorrect because it shows a device frame as well as a device button which the iPad Pro 3rd Generation doesn’t have., the right one is fine as it is without any frame.

So, ensure, whenever you are uploading a preview along with the device, that device should be an Apple iPhone or iPad exactly as they look. Otherwise, Apple may reject your app.

All apps must include a link to their privacy policy in the App Store Connect metadata field and within the app in an easily accessible manner.   Guideline 5.1.1 – Privacy – Data Collection and Storage

Apple has a very strict privacy policy requirement for all apps that appear in the iOS app store. Specifically, this includes:

Specifically, Apple has made a point of mentioning that there are two kinds of links it requires apps to have. First, all apps must include a direct link to Support along with contact information.

Secondly, if you have an app for children or there is a subscription service offered through the app, you must include a link to a Privacy Policy page.

To avoid Appstore rejection, make sure that your privacy policy is easily accessible both within your app and app page in the App Store.

It should explain how you use the specific data that you collect: how it’s stored, and whether or not you share it with other third-party entities.

If you’re not already, make sure you’re compliant with GDPR as well as with Apple’s privacy policy.

In case of unauthorized use of the intellectual property rights of a third party or other company. In particular, if you upload third-party content or video and generate advertising revenue in the app, approval is not allowed.

When making an app, prototype -web-view and push-made apps (web apps that connect websites such as home pages) need to review before you can know whether they are released.

Although it is not unconditionally rejected by Appstore because it is a web app, there are some apps that cannot be released due to such cases.

Use payment mechanisms other than in-app purchase to unlock features or functionality in the app Guideline 3.1.1 – Payments –  In-App Purchase

If your app takes payments to unlock functionality or allow the user to download digital content, transactions must go through the official Apple in-app purchasing system. This is to ensure that money is securely transferred via Apple’s marketplace.

This is something to be aware of when converting your website into a mobile app since traditional payment systems will be connected to the site.

Brian Armstrong, the CEO of Coinbase said: “Apple so far has not really played nice with crypto; they’ve actually banned a bunch of features that we would like to have in the app, but they just won’t allow it — so there’s potential antitrust issues there,”

Also, Apps cannot mine for cryptocurrencies unless the processing is performed off device.

However, apps can act as exchanges in facilitating transactions or transmissions of cryptocurrency on an approved exchange, provided they are offered by the exchange itself.

Display advertising should be limited to your main app only, and should not be included in extensions, App Clips, widgets, notifications, keyboards, watches, etc.

Your app may be rejected by Appstore if:

It can be difficult to work with Apple sometimes. Having published more than 1000 apps to the App Store, we should know. We make it easy for you to create apps – from your existing website but using the Swing2App website to app converter. Both Android and iOS apps are developed for WordPress sites, eCommerce stores, and other websites too.

You can get great apps on both Appstore and Playstore within a few weeks for a fraction of the cost.

What’s even better – you don’t have to worry about Apple or the approval process. All apps we prepare are 100% ready for Apple’s App Store and Google Play, and we submit them for you (under your own developer account). In the event of a problem, we work directly with Apple or Google to resolve it as well as provide you with 24/7 support.

With Swing2App you won’t have to worry about Appstore rejection!

PUBLISH YOUR APP WITH SWING2APP IN THE FIRST GO!