How to build a no-code app in different languages? 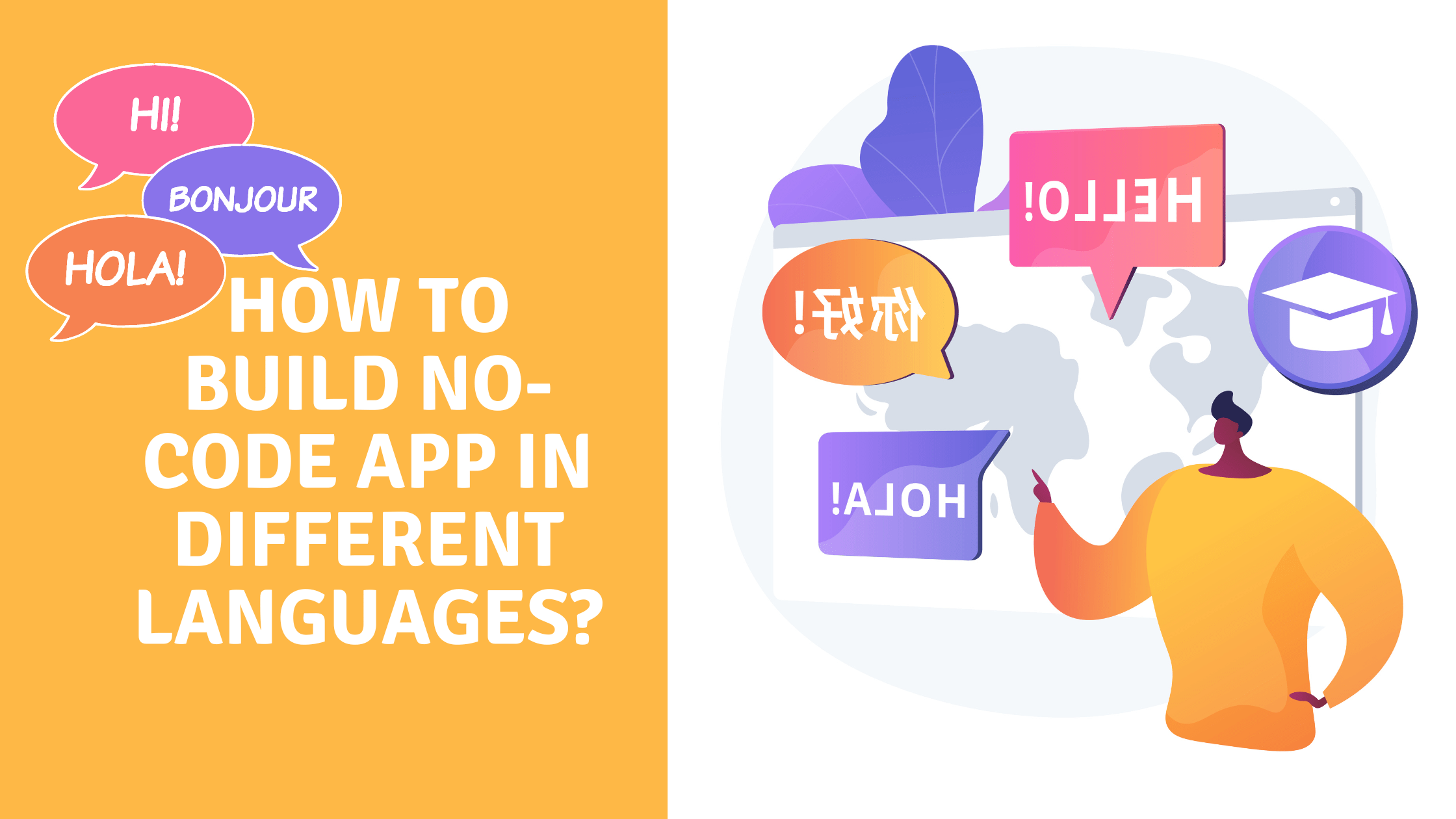 When you work for a mobile app development agency, you may work on apps in different languages, for clients based around the globe. The benefits and learning opportunities are many when you’re a no-code developer – but it’s not without its challenges, too!

A Swing2App no-code app developer can develop apps in any language, and usually works with clients who want apps in languages other than English. Our goal in this blog is to share our best practices for building apps in different languages and cultures.

WHY SHOULD WE CONSIDER DEVELOPING APPS IN MULTIPLE LANGUAGES?

Globalization means businesses must consider language as one of the key drivers of growth, especially if they transact and deal with people across borders in their native language.

Developers face another challenge here in designing an app that won’t alienate a significant portion of their target market. Who will translate the text? How can we ensure that these translations are accurate? Do we need to take any technical considerations into account? Can multi-language features be added to an existing app in the market?

Read on to find the answers.

HOW DO YOU LOCALIZE A MOBILE APP?

A mobile app’s localization allows it to support multiple languages. In most cases, apps are designed to support English as the primary language of communication. Supporting only English can limit the number of users and downloads of your app. Having only English as your app’s language might result in your app not being discovered by many potential users from non-English-speaking countries. Whenever you create an app for clients whose language is different from your own, you’ll need app localization to help you make it work.

The process of localizing mobile apps goes far beyond simply translating them. Translation is the simple act of translating words from one language to another. Localization, on the other hand, is tailored to a user’s language and cultural preferences.

Give users the option to select their preferred language when loading the app or add code to automatically select the language based on their device language settings when they load the app.

Pros – Apps can be customized according to the language of the user, and the user only downloads the app that matches their language preference.

Considerations – multiple apps must be maintained by the developers and also define a way to select the relevant language by the user.

Build a single app with multiple languages within that single app. A translation is usually done for each piece of text in an app.

Pros – each app includes all the languages supported by the app; users just have to select one.

Considerations – If no translation is provided, the default content will appear. All content must be available in all languages, thus making the app larger, even if users are only likely to use one.

THE BENEFITS OF MULTI-LANGUAGE APPS

The benefits of understanding an app’s content in the language a user chooses cannot be overstated. By overcoming language barriers, shops can sell more products, social networks can be more active, stories can be more entertaining, and forms can be filled out with clarity and accuracy, among many other benefits.

The use of multi-language apps also helps organizations build better relationships with their customers. When users see their native language, they immediately establish a sense of commonality. In addition to providing additional value to its users, multi-language apps allow them to communicate in a language they feel more comfortable using than their competitors.

The app’s multi-language capability increases its potential customer base and allows it to reach global users and international visitors, which can pay huge dividends in the long run rather than being limited to one language. Furthermore, offering such a service can also boost a company’s image, which is great for brand recognition and reputation.

KEY POINTS TO CONSIDER WHILE LOCALIZING:

Creating multilingual apps is challenging in part because localization is an afterthought. As an example, if a client wants the app to be localized for a different language, you will have to retroactively complete the localization process.

To take a new audience and language into consideration, you’ll need to rework the design process, mock-ups, and prototypes. Although it’s not impossible, it will definitely take more effort. We hope you’ll be able to build multilingual apps for your clients that they love and that their users enjoy using if you follow these best practices.

You’re already asking the right questions if you’re wondering how to conduct user research! It is important to understand your potential app users’ needs, interests, and cultures when conducting user research.

Learn about customs, cultural taboos, preferences, and humour. Find out what phrases, humour, and instructions are needed for mobile apps. Find out what they all have in common by looking at popular apps for that audience. Consider interviewing some potential app users and asking them how they use mobile apps, what features they like, and what aspects to pay attention to!

Visuals play a big role in mobile apps. Illustrations, icons, colours, and pictures can be interpreted differently by different cultures. Keep your visual elements as clear as possible! Colour choice for your mobile app should take cultural context into consideration.

For example, in the US, the ‘cart’ icon is often used for e-commerce apps, but in Asia, the ‘shopping bag’ icon is more intuitive. When you include images of people, try to make them relatable and local. For your app to be relevant to its audience, lifestyle images, landmarks, and product shots must be localized.

Keep your UX copy consistent throughout the app. In other words, if you’re using ‘Next’ on a button, don’t use ‘Proceed’ somewhere else. You will be able to make your user experience more seamless and efficient if you pay attention to consistency in terms of colours, phrasing, and instructions.

Be sure to test your prototype as much as possible before proceeding with your app in the market. Your mock-ups should be reviewed by potential users, and you should gather as much feedback as possible.

The process of building an app in a different language isn’t easy. If you’re learning how to write UX copy, you don’t have to be a native speaker! Keep the language simple so that your target audience can understand your app. Short phrases will be easier to use if you’re using translation software. Check your slang, cultural references, or puns with a native speaker before using them. It is a general rule of thumb that the simpler your content is, the easier it is to translate and localize.

WITH SWING2APP YOU CAN CREATE NO-CODE APP IN DIFFERENT LANGUAGES

Swing2App does not offer an automatic translation system for system messages or error messages, so only the content managed within Swing2App will be translated.

How to build apps in multiple languages with Swing2App?

STEP1. Create and test the initial app in the main language. Read about how to create an app in Swing2App: How to create a no-code app from Swing2App prebuilt UI.

STEP2. Once the app is created, duplicate it and change the content to be in another language

With Swing2App you can make your app in the language you want but one language per app.

You can translate all the dynamic text from the “Manage Text” option under the “Services” on Manager page of Swing2App.

“Manage Text” is a text management page where you can check as well as edit all the phrases and messages displayed and used in the app.

Entire text language of the app including the content phrases can be edited directly by the administrator and can be used by translated to a different language.

Here, you can check all the phrases used in the app on the app string management screen as well as convert it into any language.

All you need to do is download the entire app string management file as excel sheet, and then edit text in your preferred language and finally upload it again.

Simply enter the names of the menus in the language that you prefer, and your app will be ready in another language!

STEP3. Update and publish your app.

Go to Maker V3 page and update your app.

Create an App List Component and publish the language-specific apps to the Portal (if you are making multiple apps). This will enable a user to download and access the app in their language and ignore other language apps.

Now that Swing2App’s no-code app builder is available, you can easily develop Android and iOS apps in multiple languages. By using our DIY app maker, you can convert your app into any language and make it live in multiple languages within minutes. Plus, no matter what language you choose, the content will appear exactly the same.

Regardless of distance and time zone, you can test your app made in different languages from anywhere and keep your customers updated. Stay connected to your customers by creating a location-specific language app using our DIY app builder. Additionally, it can help you improve your localization to a specific region and culture.

You must create an app that can serve users in their own language if you want to expand your business across borders. Other benefits of developing a location-specific language app include:

There are many apps in the app store that are available in multiple languages. The majority of companies don’t produce different app versions for different locations unless there are regulatory or compliance issues. Many games feature multiple languages, but the app is the same.

Don’t worry! Distributing multiple versions of your app to different app stores is also a convenient option if you are targeting localization for a few languages. When apps are submitted, they can be restricted to specific app stores. As a result, for example, the Chinese app store would not have the US version of your app.

A user may be confused when an app isn’t available in their app store, or when their app has different functionality or content than their colleague’s since it came from a different app store. Due to this, most companies don’t want to distribute different apps to different stores. The alternative is to first launch the application in a specific geography before adding other regions. Pokemon Go, for instance, was only available in US app stores when it launched.

When you use Swing2App, you can create multiple apps in different languages and manage them conveniently on the Swing2App dashboard.

For example, if you want to make your app available worldwide, then you can upload an English version separately from a Korean version that is only available in Korea.

Although all this is true, going global with your app is not as easy as it seems. There are several risks involved, from cultural mismatches to legal issues. Make sure your app can handle the different risks associated with your products. To monitor the performance of your app, KPI metrics are the most effective method. By using these KPI metrics, you can determine which areas of your app need improvement.

It can be challenging to promote an app globally. If you create your app with Swing2app, however, it can be easily done, since it offers various customization features. The promotion and optimization of the app can also be done easily with Swing2app.